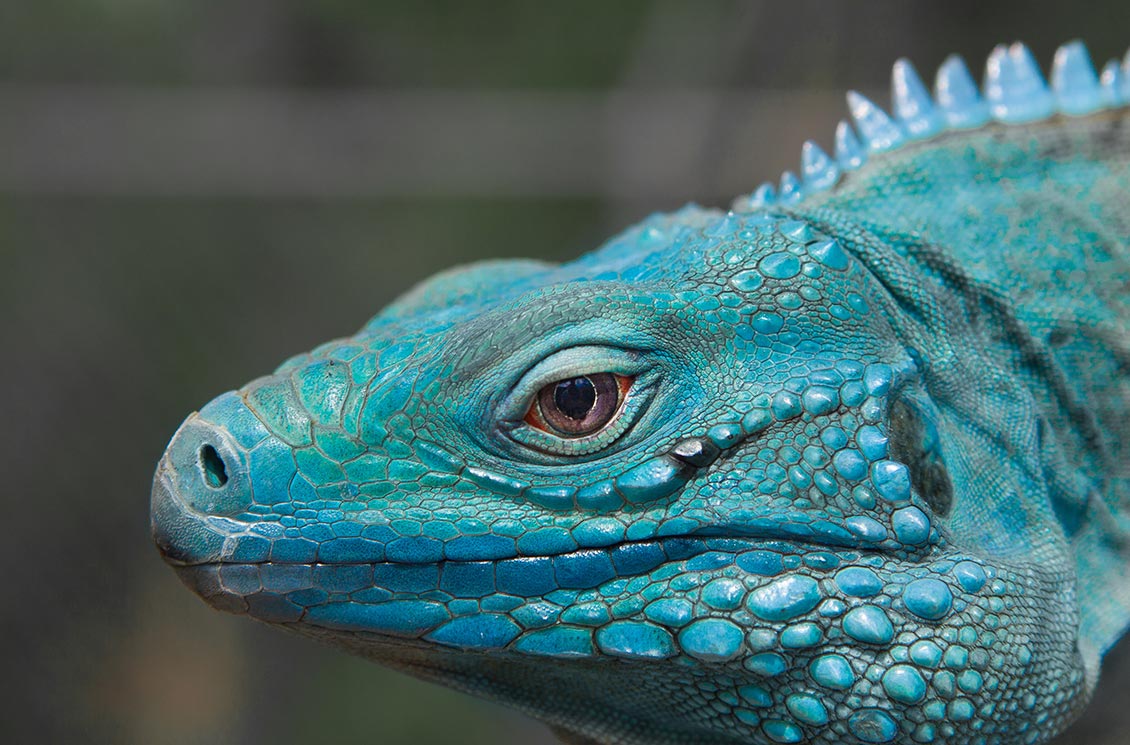 Mention the phrase ‘blue iguana’, and the average listener will no doubt recall a busy nightclub, a tropical cocktail, or a mythical creature from the pages of a fantasy novel.

But here in Cayman, the words ‘blue iguana’ mean exactly what they say:

A giant dragon-like lizard. Decked out in brilliant blue.

A Cayman reptile’s storied past

From the mural at Royal Watler Cruise Terminal to the entryway at Queen Elizabeth II Botanic Park, the blue iguana often serves as a symbol of Cayman’s uniquely beautiful selection of breathtaking wildlife.

And with good reason.

Travellers familiar with smaller iguanas in green or khaki camouflage should prepare themselves for a bit of a shock: the Cayman blue can reach over five feet in length (from nose tip to tail), and their colour is––you guessed it––a shocking shade of vibrant aqua that brightens during the mating season.

Blue iguanas tend to frolic among Grand Cayman’s rocks and scrubs, blending in with the stone and surf. They also tend to favour flora over fauna; their diet consists mostly of flowers, fruits, leaves, and stems (with the occasional insect thrown in).

Sadly, though the blue iguana once boasted a population in the tens of thousands, a combination of human activity and wild animal predation has placed the famous lizard in serious trouble, particularly over the last few decades. By 2001 less than thirty blue iguanas remained, and the International Union for the Conservation of Nature had officially placed the species on the ‘critically endangered’ list.

Caymanians step in to lend a hand

Luckily for Cayman’s baby blues, a handful of dedicated conservationists saw the evolutionary writing on the wall and decided to take action. 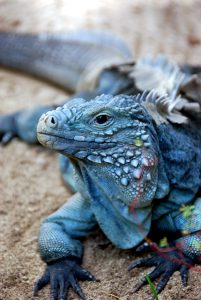 In 1990, the Blue Iguana Recovery Programme started with the goal of restoring the blue iguana population. The programme’s successful efforts led to the release of its 1000th iguana into the wild in 2018. The following year, the organisation to re-established itself as the Blue Iguana Conservation.

Managed by the National Trust for the Cayman Islands and housed in Queen Elizabeth II Botanic Park in North Side, Blue Iguana Conservation (BIC) is supported by international partners and stakeholders (including the International Reptile Conservation Foundation and the Wildlife Conservation Society). Its powerful work dating back to 1990 in both breeding and preservation has brought the blue iguana species from ‘critically endangered’ upwards to ‘endangered’ in a little over a decade (the official threat was downgraded in 2012).

Witnessing the blue iguana in action

For those hoping to see Cayman’s bluest mascot in person, BIC hosts a variety of tours for up-close viewing of its resident lizard. Casual fans of the blue iguana can take a walk through the BIC facility and learn more about the legendary creature from BIC wardens on the standard ‘Blue Iguana Tour’, which also allows for self-guided roaming on the Botanic Park grounds. There are likewise virtual tours available online for ‘zoom’-ed-in views of the BIC habitat.

Iguana aficionados looking for a more immersive adventure can sign up for the ‘Blue Iguana Warden Experience’, which lets visitors follow in the footsteps of BIC wardens as they go about their day-to-day activities and offer hands-on care to the iguanas living on site. Registration is required for both the online and ‘Warden Experience’ tours, so be sure to call ahead of time for tickets to those events. 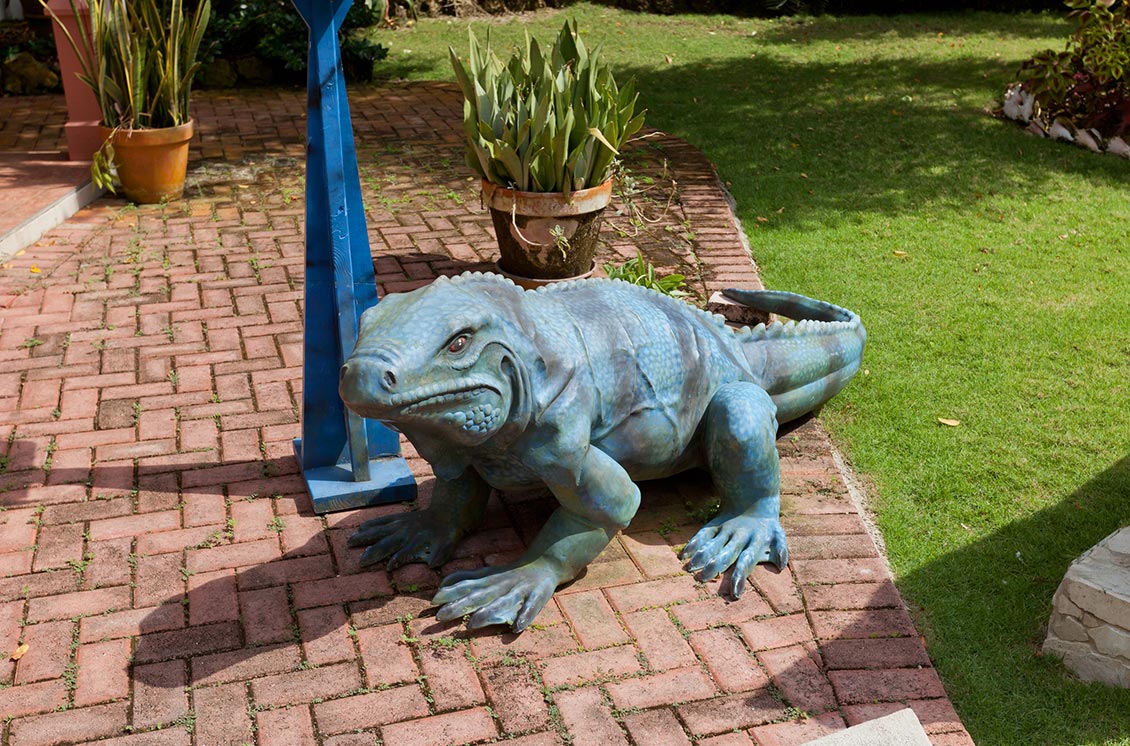 The general ‘Blue Iguana Tours’ are conducted twice a day (10:30 am and 11:30 am) from Tuesday to Friday, with tickets available 15 minutes before the start. We recommend this tour for all blue iguana novices––especially as nothing quite beats the excitement of seeing these royally blue reptiles in the flesh.

Whichever tour you choose, don’t pass up your chance to get acquainted with Cayman’s most colourful and charismatic indigenous animal.

Their continued existence is a true Cayman miracle.

The Blue Dragon Trail, a collection of larger than life art installations, is a collaboration between the National Trust and the National Gallery. The project was created to draw attention to the plight of the endangered Blue Iguana.

The trail consists of fifteen blue iguana sculptures, each one colourfully painted by local artists. The eye-catching ‘dragons’ are dotted around Grand Cayman and can be found at popular island locations including Camana Bay, Rum Point, Smith’s Cove and Governor’s Beach. It’s a fun activity for families with young children, who are excited to discover each ‘Dragon’.

Kings Point Condominium, In the Southeast of Cayman Brac. Kings Point’s luxury 2 bed, 2.5 bath oceanfront condominiums are uniquely designed to withstand the elements and integrate both the bluff and Sea that creating an environment distinctively Caribbean.

8 reasons a Water’s Edge home will change your life

India LDecember 22, 2020August 9, 2022
The view is straight from a postcard of all your tropical island dreams: sun-kissed, sugar-white sands, vibrant blue stretching as far as the eye can see. Living on Seven Mile Beach is a dream for most, but a home at Water’s Edge property makes [...]
Read more »

80 Degrees CaymanSeptember 16, 2019January 10, 2022
While we all love to share about our explorations through a new city, a secluded beach, or a spectacular resort, there is another component to a wonderful holiday that doesn’t always result in social media love: a beautifully designed hotel bathroom.  What is better [...]
Read more »