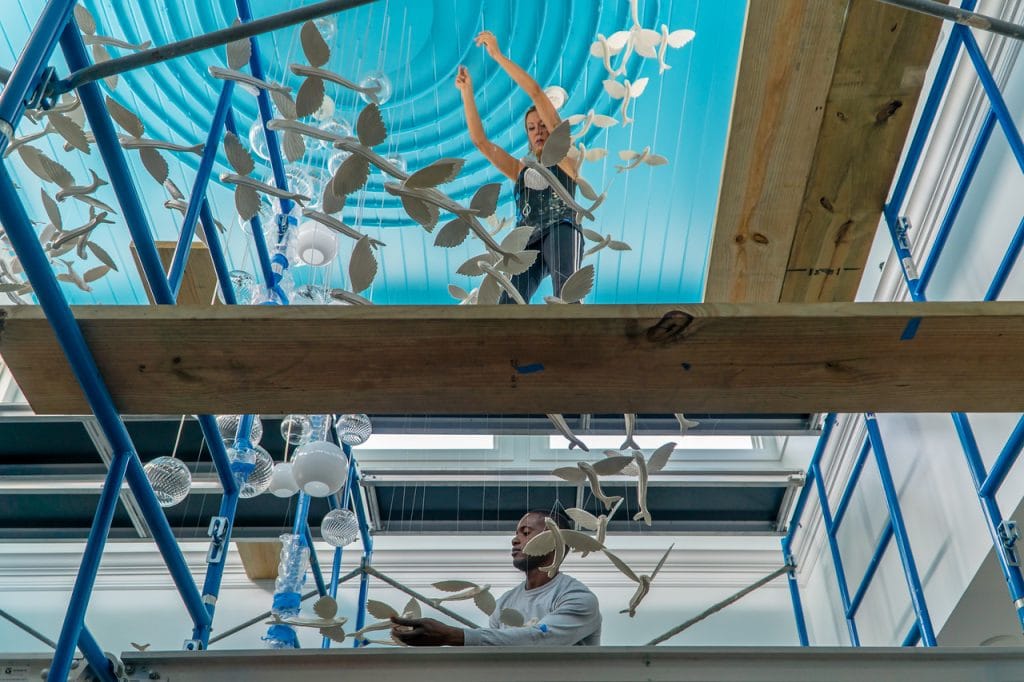 Tansy Maki has spent close to 20 years living in the Cayman Islands. As one of the islands’ most prolific and renowned artists, her work can be found in homes, offices, and public spaces throughout Grand Cayman.

So, when she was asked to create a new piece for Jasmine, Cayman’s hospice care village, it was only natural to draw inspiration from the beauty of the oceans that surround Cayman.

The finished piece is The Glide, a collection of 130 handcrafted silver flying fish. Named for the collective noun of this species, The Glide was a true work of love for Tansy, who poured her heart and soul into the magnificent installation.

“This concept came to me in a dream almost 10 years ago,” says Tansy, who has in the past focused on large-scale art murals.

“When I met with John Doak, the architect of Jasmine, and when I saw the space, I knew this piece was meant to be created for this building.

“The flying fish is such a beautiful, ethereal creature. When out deep sea fishing in Cayman, I have always admired their whimsical beauty and ability to soar over the surface of the ocean.”

Tansy’s aim was to create a piece that was calming for the residents of and visitors to Jasmine, and was in harmony with the surrounding architecture and atmosphere of the building.

“It is very uplifting and calming watching flying fish glide over the ocean’s surface, and I wanted to create a piece that instilled those feelings in the viewer,” she says.

“The piece is called The Glide because that is the name of a group of flying fish, and the word ‘glide’ is soothing and calming.”

The Glide comprises more than 130 hand-crafted, individual flying fish. Tansy says the installation was an intricate and immense process.

“When people view a piece of art, it is hard for them to imagine or comprehend the amount of work that goes into one creation. The creative process for this was multifaceted,” she says.

“The bodies and wings of the flying fish are in different shapes and sizes. Each piece was sanded and shaped, then assembled with different positions for variations, as would be seen in nature.

“Then each sculpture, once assembled, was primed and hand-painted with three separate layers of silver and pearlescent glazes, then sealed with a UV resistant clearcoat.

“Each sculpture has four points of hand-tied flurocarbon line on the body and two flurocarbon lines going up to the ceiling where they were individually hand-tied to tiny fascinators. I then positioned and hung every flying fish.”

The effect is stunning. The flying fish are both elegant and striking. At different times of day, the sunlight reflects off the pearl and iridescent fish, and they seem to glow as they glide through the air.

It is the largest installation of its kind in the Cayman Islands, and follows on from Tansy’s 26-foot long driftwood sculpture, which she recently created to be suspended above the bar at Ave restaurant at Seafire Kimpton Grand Cayman.

This concept came to me in a dream almost 10 years ago.

Tansy is thrilled with the final result. Much of her long career has been focused on fine art murals, but in the past few years, she has been turning her attention to sculpture and three-dimensional contemporary works. With The Glide, her newfound focus has captured her vast talent as one of the island’s best sculptors and artists.

John Doak, the architect of Jasmine, says the installation was the final piece of the puzzle in creating a building that was a place of joy rather than a place of sorrow.

“Tansy’s rising spiral plays such an integral part in the spiritually uplifting architecture of Jasmine’s foyer – a joyous and thoughtful interpretation of the celebration of life,” Mr Doak says.

When Jasmine was officially unveiled, the ribbon was cut by Camilla, the Duchess of Cornwall, during a visit to Grand Cayman in March 2019.

“The Duchess spoke to me about the piece and she loved it,” Tansy says.

It has since been received with acclaim from visitors to and residents of Jasmine, who relish the beauty of the flying fish, their elegance and harmony.

Tansy is content to know that The Glide has done exactly what the artist intended.

“This is one of the most important pieces I’ve created from a spiritual standpoint. It brings me joy to know that it will bring a sense of tranquillity and peace to the viewers.”

This house is well constructed, great elevation and privacy. Offering great value for money. The house is 1800 sq ft in size with a 2250 sq ft unfurnished lower level that could be a great income generating apartment, nanny flat, in laws [...]

Situated on Water Cay Road, close to Cayman Kai and Rum Point, enjoy the peace and tranquility of island life at its best. This beautiful lot is over half an acre with over 100 linear feet of water frontage. It is partially [...]

80 Degrees CaymanMay 18, 2021August 3, 2022
A bird’s eye view… at ground level? With artwork by Tansy Maki, anything is possible. On January 24, visitors to the Queen Elizabeth II Botanic Park’s Family Fun Day had the chance to reimagine the world from a banana bird’s point of view, all [...]
Read more »

80 Degrees CaymanSeptember 16, 2019January 10, 2022
Wellness is at the heart of the Cayman Islands, with a relaxed atmosphere and stunning backdrop that seem designed to restore your mind, body, and soul. It doesn’t hurt that the islands are, naturally, surrounded by water, with living near the ocean understood to [...]
Read more »