Sotheby’s to Offer the Collection of Ambassador and Mrs. Felix Rohatyn Across a Series of Sales This Year

Sotheby’s is pleased to announce that the collection of Ambassador and Mrs. Felix Rohatyn will be presented in a special, single-owner sale at Sotheby’s New York in October and in select Sotheby’s sales throughout the year. Encompassing Old Master paintings and drawings, Impressionist masterworks, 20th century design, and more, the Collection reflects the Rohatyns’ deep and abiding love of French culture and passion for collecting across categories. The sale series kicks off with Important Design on 30 July in New York, which will be highlighted by a remarkable pair of gilt bronze monkeys by design icon François Xavier Lalanne.

George Wachter, Sotheby’s Chairman and Worldwide Co-Chairman of Old Master Paintings, commented: “It is an honor and a privilege to share the collection of Ambassador and Mrs. Felix Rohatyn. Amassed over decades, the collection beautifully embodies the synthesis between European taste and their American vision. The core of the Rohatyn Collection centers on a celebration of French culture—befitting the significance that France held in Ambassador Rohatyn’s life, from his childhood and his career at Lazard, to his eventual return as U.S. ambassador. The collection comprises a striking variety of works, from French Old Master paintings and drawings to Impressionist paintings and Lalanne’s Singes. They are complemented by the lyrical Venetian views by Canaletto and Bellotto, each a masterpiece of stunning quality and importance. The works in the collection converse with one another across different time periods and styles with the sophistication, refinement and elegance that Ambassador and Mrs. Felix Rohatyn embodied themselves.”

Born in Vienna in 1928, Felix Rohatyn fled with his family to France in 1935 to escape the rising Nazi party. By 1942, his family’s journey to safety had ended in the United States, after a transit through Morocco, Portugal, and Brazil. Rohatyn’s renowned professional career began in 1948 when he joined the investment banking firm Lazard Frères & Co., LLC in New York. After an interlude serving in the Korean War, he spent 40 years with the firm, becoming a partner in 1961. Rohatyn also served on the board of the New York Stock Exchange.

Rohatyn is best known as the resilient investment banker who helped save New York City from bankruptcy in the latter half of the 1970s. During that financial crisis, Rohatyn was selected by the New York State government to be part of an advisory committee to alleviate the city’s fiscal crisis. Leading the committee, he advocated for the creation of the Municipal Assistance Corporation (M.A.C.) of the State of New York and became its chairman. The M.A.C. ultimately helped resolve the crisis. He later served as the U.S. Ambassador to France during the second Clinton administration, from 1997 through late 2000, and was named a Grand Officier in France’s Legion of Honor.

In October, Sotheby’s will offer more than 30 paintings and drawings in the marquee Rohatyn single-owner sale. Two 18th century views of Venice painted by Canaletto and Bernardo Bellotto will lead the presentation.

The most beloved Venetian painter of all time, Canaletto created this bright, colorful view (estimate $3/5 million) of the famous Rialto bridge in the 1730s, at the height of his career. At this time, his works had immense appeal among British visitors on the Grand Tour, and it seems likely that this painting was commissioned or purchased by a British patron, given its early English provenance. This is most likely the prime version of this composition by Canaletto, of which at least four other examples are known.

Bernardo Bellotto’s beautifully preserved canvas (estimate $3/5 million) depicts the Campo Santa Maria Formosa, one of Venice’s largest and most distinctive squares, beneath a flinty blue sky. The view is taken from Palazzo Ruzzini looking to the south, toward the façade and campanile of the square’s eponymous church of Santa Maria Formosa. To left of center is the Palazzo Malapiero Trevisan with its dedicated bridge, and along the far-left side, in shadow, are the gothic Palazzi Vitturi and Donà. This magnificent veduta can be dated to 1740-41, when Bellotto was still in his late teens. Its mastery of light, composition and technique show his ability to rival the work of his uncle Canaletto, while still forging his own personal—and more lyrical—style, even at a young age.

Leading the selection of drawings in the collection is a single sheet, circa 1715, containing two studies (estimate $200/300,000) by Antoine Watteau. Executed in his characteristically elegant and robust use of red chalk, the drawings provide a satisfying mis-en-page, delightfully balancing one another with their differing poses. While they were clearly drawn at the same time they are not, as is typical of Watteau, studies for a single work. Despite his all too brief life (like Raphael, he died at the age of 37), Watteau left a considerable number of drawings, all executed in chalk, yet in an astonishingly wide variety of styles and techniques. Though certainly appreciated as a painter in his own time and thereafter, it is as a draughtsman that Watteau is perhaps most revered. He knew that this was where his greatest talents lay, a fact that may well have frustrated him, but that has been the source of immense joy to many generations of drawings lovers. Watteau’s drawings were appreciated even in his own time, in a way that had no precedent in earlier French art.

Other highlights of the sale include two still lifes by Anne Vallayer-Coster, together with Élisabeth Vigée Le Brun and Adélaïde Labille-Guiard, the pre-eminent female painter in pre-revolutionary France; a marvelous large-scale pair of Hubert Robert paintings alongside two quintessential red chalk drawings by the artist. Other drawings include important sheets by Jean-Baptiste Greuze, Charles-Joseph Natoire, Louis Roland Trinquesse as well as a fine selection of works by François Boucher. 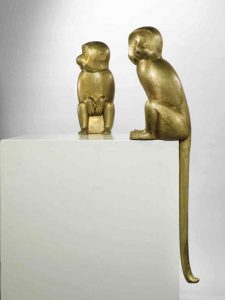 One of the standouts from the Rohatyn Collection is François-Xavier Lalanne’s endearing gilt bronze monkeys (estimate $400/600,000 each). Known as Singe I and Singe II, these charismatic monkeys are among Lalanne’s most beloved bestiaries, and will be the leading highlights of Sotheby’s Important Design Sale in New York on 30 July. Lalanne’s Singe I and Singe II were produced following a wide range of ape-inspired pieces throughout Lalanne’s career. The Singe series signals a move from functionality to objet d’art and helped spur the revival of the motif towards the end of Lalanne’s career. Ambassador Rohatyn discovered the visionary work of the artist duo while serving in his role as United States Ambassador to France, where he acquired the monkeys in Paris. Since then, the golden monkeys were a captivating centerpiece of Ambassador Rohatyn’s New York living room, enchanting all guests from their prominent position on the fireplace mantel. This exciting offering follows the landmark two-day sale L’Univers Lalanne: Collection Claude & François-Xavier Lalanne at Sotheby’s Paris in October 2019, which achieved $53 million. The sale established records for a single gilt bronze Singe at $1.5 million, as well as for a pair of patinated bronze monkeys, together selling for $1.7 million.

On offer from the Rohatyn Collection as part of the Impressionist & Modern Art Evening Sale in November will be Pierre Bonnard’s La Chevelure d’or (estimate $2.5/3.5 million). Painted near Cannes in 1924, the work presents a resplendent scene from the artist’s Mediterranean-inspired oeuvre, seamlessly melding his subjects with their surroundings and glorifying an everyday moment with luminous swathes of pigment. Demonstrating Bonnard’s profound mastery of color, La Chevelure d’or draws attention to the rich, jewel-like tones of the fruit and women’s clothing and plays on the signature features of the artist’s two main muses at the time: Bonnard’s lover, the effervescent blonde Renée Monchaty, and his mysterious dark-haired companion and eventual wife, Marthe de Méligny. Recent shows including the Musée d’Orsay’s 2015 retrospective Pierre Bonnard: Painting Arcadia and the Tate’s 2019 exhibition The Colour of Memory highlighted masterpieces like the present work, whose opalescent coloration charted a new, emboldened course for the artist.

Also on offer in the Impressionist & Modern Art Evening Sale is Edouard Vuillard’s Madame Vuillard Reading a Newspaper (estimate $600/800,000). The painting features Vuillard’s mother, who served as a frequent model and muse for the artist and appeared in over 500 paintings over the artist’s career, and depicts her unaware reading a newspaper beside a table set with two ceramic coffee cups. As both a portrait and a still life, the painting epitomizes Vuillard’s quiet Intimist style and his focus on the details of domestic scenes. Painted in 1912, the work also embodies many of the techniques rooted in the Nabis movement of the 1890s, of which Vuillard was a leader, including radical cropping and contrast between spots of bold color and a more subdued palette to create a sense of tension. The painting was formerly in the collection of Jos Hessel, director of Bernheim-Jeune Gallery in Paris and one of the artist’s primary patrons and closest friends in the early 20th century.

Water's Edge sits on one of the widest, most pristine parts of world-famous Seven Mile Beach. Conveniently located near some of the island’s best restaurants and shopping it is also only a short walk to Camana Bay. Unit #24, located on the [...]

80 Degrees CaymanJanuary 18, 2022July 30, 2022
Recently released, The Sothebys International Realty 2022 Luxury Outlook report explores high-end markets across the globe and follows the trends that will likely shape the market in the coming months. What is it that buyers expect to find in multi-million dollar properties? We reveal [...]
Read more »

80 Degrees CaymanFebruary 29, 2020January 10, 2022
Replete with windows or wrapped in glass, these sunny spaces allow for comfortable enjoyment of nature, natural light, and views year-round, no matter the weather. Croydon House This early-20th-century Montecito residence is both refined and relaxed, combining the traditional grandeur of an Old World [...]
Read more »

80 Degrees CaymanNovember 9, 2020August 9, 2022
Whether hopeful, incendiary, combative, or just plain weird, the work of the masked artistic vigilante known as ‘Banksy’ is always an uncontested event. It should come as no surprise, then, that an infamous Banksy painting created yet another in a long line of public [...]
Read more »