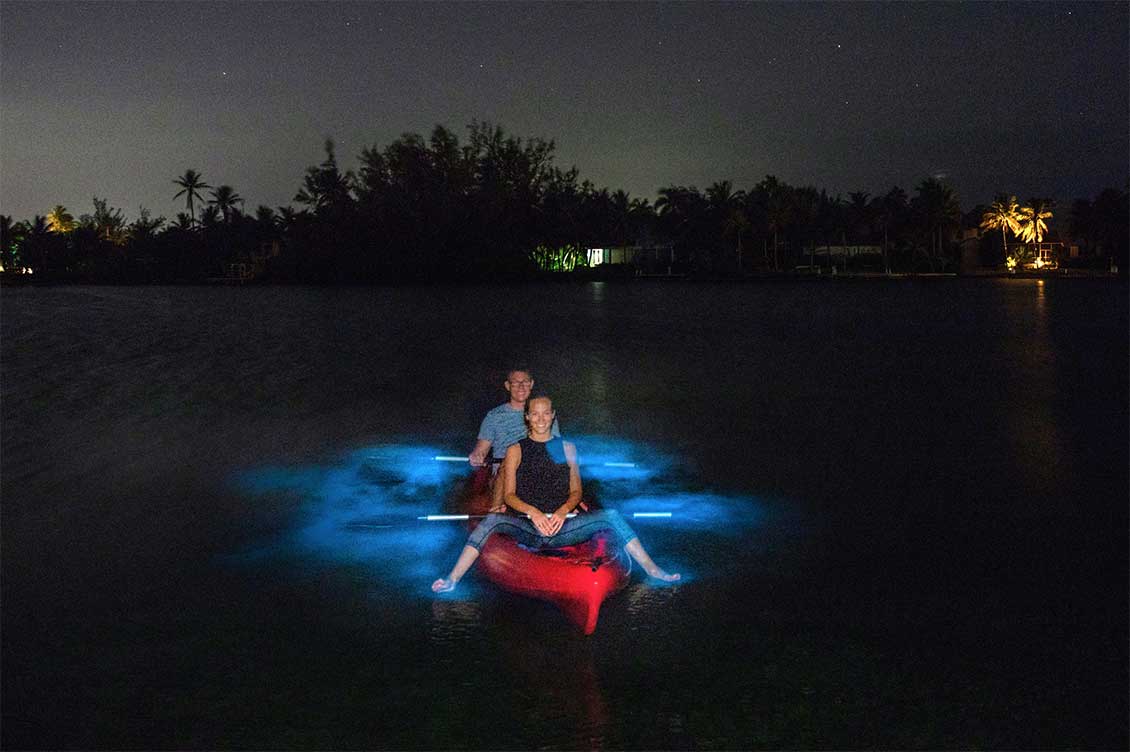 Have you ever seen the water glow at night like it has a magical glitter beneath the surface?

In Grand Cayman’s Bioluminescent Bay (more commonly known as Bio Bay), wonderous little creatures live en masse and when disturbed in the dark of night, they create a ‘glow’ rivaling the magical fairy dust found only in movies.

Bioluminescence is a chemical reaction within organisms that emits light. A well-known example of bioluminescence is found in a firefly. Just like a firefly, the microscopic organisms found in the water of Bio Bay, called dinoflagellates (think relative size to Horton Hears A Who), produce this reaction for a momentary glow that we see as blue-green light. When thousands of these tiny dinoflagellates glow together, the effect rivals scenes found in the movies such as Avatar. To get out and see this impressive display you must do so by water, and our best recommendation is on a kayak! With the swoosh of a paddle or a kick of your foot through the water, the immense glow illuminates all around and will even light up other larger fish and creatures moving about in the water.

Tom Watling of Cayman Kayaks passionately shares his love of the area and Bio Bay while he guides groups of people eager to catch the display of nature’s glowstick on his kayak tours. Don’t worry if you don’t have experience in a kayak, he will make the trip enjoyable (and there’s a boat option too). An easy paddle along while looking at the stars above in preparation for what lies ahead. Once in Bio Bay, that first sighting of blue speckles in the water is just as exciting as finding the golden ticket. Leading by example, Tom shares his knowledge of these tiny organisms and how humans, in general, can easily maintain the area for generations to come by adopting simple practices like electric boat engines and blue lighting, to highlight a few.

Old fisherman tell tales of the days when they remember all of North Sound glowing in the night as boats crossed the water. Today, the population is filtered into Bio Bay and remains trapped by the natural and manmade geography of the area giving the opportunity for reproduction and a healthy population of these organisms, but could also be seen as the last frontier for such a phenomenon.

Bioluminescence is found, consistently, in tropical areas but has been recorded in other locations as far north as California and even Alaska, on seldom occasions. Due to the rare nature of such an organism, people should refrain from using repellants and lotions prior to going on a trip to see this spectacular occurrence. Because it isn’t exactly known how our human effect has played a roll in the long-term survival of the bioluminescence population, the most we can do now is educate and lead by example for the future. If for any reason a kayak is not your choice, Cayman Kayaks also offers an electric boat tour to give you the same up close and personal look at Bio Bay. For a rarely occurring, life experience, kayak (and boat) tours to Bio Bay in Cayman Kai are must see when in Grand Cayman – we trust you’ll want to return again and again.

80 Degrees CaymanMay 30, 2022February 1, 2023
Anyone lucky enough to be living in the Cayman islands will want to pinch themselves because this trio of incredibly beautiful islands really is too good to be true. Gorgeous sunshine tempered by soft balmy breezes, world-class, award-winning beaches and so much more to [...]
Read more »

80 Degrees CaymanSeptember 16, 2019January 10, 2022
Wellness is at the heart of the Cayman Islands, with a relaxed atmosphere and stunning backdrop that seem designed to restore your mind, body, and soul. It doesn’t hurt that the islands are, naturally, surrounded by water, with living near the ocean understood to [...]
Read more »

OPINION: As demand grows for cryptocurrency as payment for property, we asked an expert to weigh in

80 Degrees CaymanDecember 19, 2019January 10, 2022
The Cayman Islands is home to prestigious properties and some of the most high-wealth individuals in the world. So, it makes sense that the real estate market would be at the forefront of the burgeoning cryptocurrency market. Worldwide, purchasing a property with cryptocurrency it [...]
Read more »