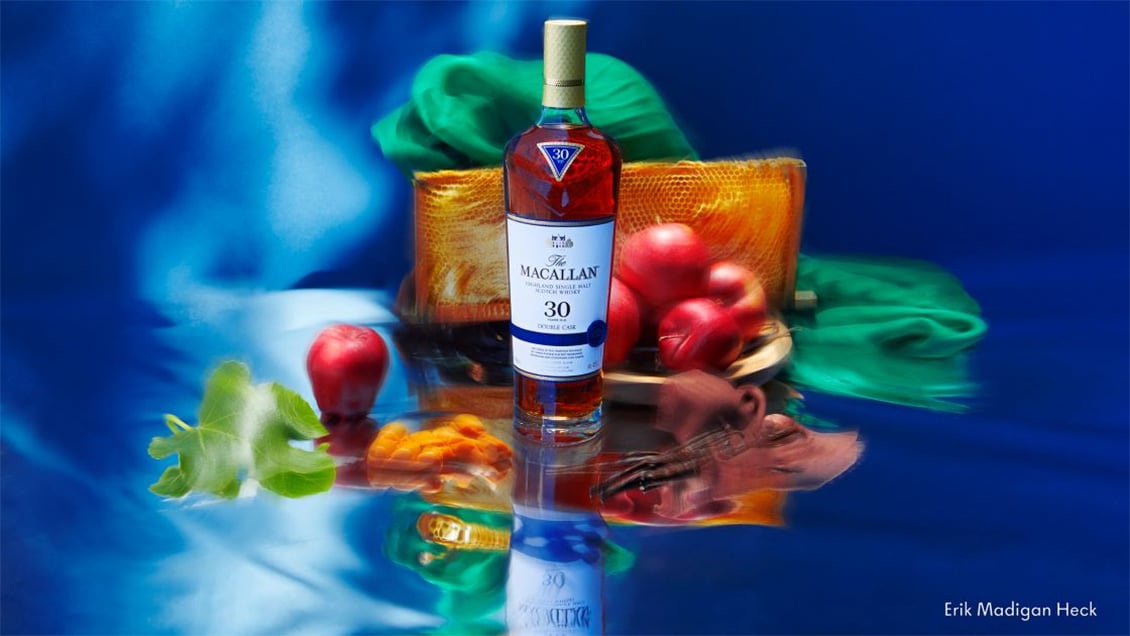 Article Featured Image: The Macallan has collaborated with American artist and photographer, Erik Madigan Heck, to showcase the tastes and flavor profile of Double Cask 30 Years Old. Taking his inspiration from the natural landscape on The Macallan Estate and the flavors and natural color of the whisky, he captured imagery evoking the single malt’s character in a unique and contemporary way, the company says.

A landmark charity sale features rare lots including the first ever bottle released by Balvenie.

In the proud 383-year history of The Worshipful Company of Distillers, there has never been a sale quite like it. On 3 December, in partnership with Sotheby’s, some of Scotland’s rarest and most exquisite single malt whiskies go under the hammer, all donated by some of the country’s finest distilleries: the title of the auction, Distillers’ One of One, neatly captures the sale’s unique nature.

More than 40 lots are on offer, with estimates for each ranging from £1,500 to more than £500,000. All proceeds will benefit The Youth Action Fund, established by The Distillers’ Charity to support disadvantaged young people in Scotland.

The Macallan 30 Year Old Double Cask Whisky has recently become an out of stock item that retails for CI$3000. For those in Cayman, there is an excellent selection of The Macallan available, including the Macallan Double Cask 12. The Macallan is also one of the top trending whisky’s today.

The lots range from single bottles of extremely rare old whiskies to whole barrels. Among the highlights is the Bowmore Onyx, a 1.4l hand-blown decanter containing a unique 51-year-old whisky, and the first ever publicly released bottle from Balvenie, which is also one of its oldest at 50-years-old.

Jonny Fowle, Sotheby’s senior whisky specialist noted the highest value lot in the sale: an entire cask of still-maturing 1978-distilled Talisker, its cask-end transformed into a work of art by acclaimed artist Callum Innes. “Callum and I used to live on the same street in Edinburgh, so I feel a personal connection to this cask,” he says. “Callum’s art will be incorporated in the design of the bottle labels for when the cask is ready, in five years’ time.” Fowle also praises the generosity that has made this sale possible. “The spirit of the Scotch whisky community is every bit as strong as the unique contents of these wonderful bottles and casks.”

Other drink news from around the world

The oldest single malt whisky ever to be bottled and released, an 80-year-old Glenlivet Gordon & MacPhail Generations, distilled on 3 February 1940 and bottled on 5 February last year, has been sold by Sotheby’s Hong Kong for HK$ 1.5 million (£141,000). The whisky is from a first-fill sherry butt, and is housed in a decanter designed by celebrated architect Sir David Adjaye.

The Macallan has released the latest in its much-prized Double Cask range: the Double Cask 30 Years Old. Matured in a combination of European and American oak casks, both seasoned with sherry for 18 months, it boasts notes of caramel, vanilla, dried fruits and cinnamon. RRP $4,000.

Refusing to be outdone by Scotland, Japan’s House of Suntory has just released Yamazaki 55 Years Old on to the global market, the oldest release in the company’s history. An expertly-blended, deep amber spirit with aromas of sandalwood and ripe fruit, it has a suggested RRP of $60,000.

Relocate yourself to paradise

80 Degrees CaymanSeptember 15, 2021January 18, 2023
In recent times, entrepreneurs have been seeking refuge from global upheavals in a safe and secure place in which to live and work, and so the phenomenon of seeking residency elsewhere in the world has become increasingly common, with many countries offering residency programmes. [...]
Read more »

80 Degrees CaymanOctober 19, 2022February 2, 2023
Pilates Studio ENERGY Pilates will hold its annual Pink for Pilates fundraising event at the ARC at Cayman International School in Camana Bay on Saturday, 29 October. Pink for Pilates was founded by Colleen Brummer, the owner of ENERGY and a breast cancer survivor. This [...]
Read more »

Family-friendly living in the heart of Seven Mile

80 Degrees CaymanOctober 4, 2022February 2, 2023
Family living in the Cayman Islands does not come more luxurious, comfortable or convenient than canal-front properties in Governor’s Harbour, located in the heart of the Seven Mile Beach corridor. A beautiful home in Jellicoe Quay in this location fits the bill to perfection. [...]
Read more »