Rum Point is one of the most highly sought-after stretches of beach-front living anywhere in the world. Nestled within this most spectacular of settings is a newly remodelled estate called Blue Water Therapy that has been transformed from a well-loved beach-front home to an outstanding property that offers luxury living at its very best.

It is evident from the detail infused into every nook and cranny of this majestic home that the U.S.-based owners have in-depth knowledge of the construction industry (the owner has a general construction company). Their extensive industry experience meant they were unfazed by the formidable task of transforming the property into something that felt like home.

“Actually, the process was a lot of fun,” they confirmed. “We chose every detail ourselves. It was all very exciting.”

The property consists of four bedrooms and four and a half bathrooms and also has a separate guest cottage. Working with the bare bones of the house initially, the couple sought to change pretty much every aspect of the home.

“We had a list of about 40 items that we wanted to change,” the said. “Our main aim was to take what we had and make it into a true beach home.”

Letting the light in

An important improvement has been the replacement of all windows, which had not been conducive to showcasing the incredible ocean views the house affords it owners. Gone were the French door/ slatted-style windows and, in their place, majestic hurricane-proof picture windows that draw you into the stunning ocean beyond with just one look. 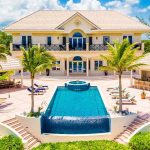 Another area of focus was the pool and deck area. Having initially hoped to just spruce up the infinity pool that already existed, the owners realised that the pool was in need of a complete overhaul, so they rebuilt it and included a heated jacuzzi and a beautifully spacious deck, along with two cabanas and an outdoor bar, creating a true beach house of distinction. 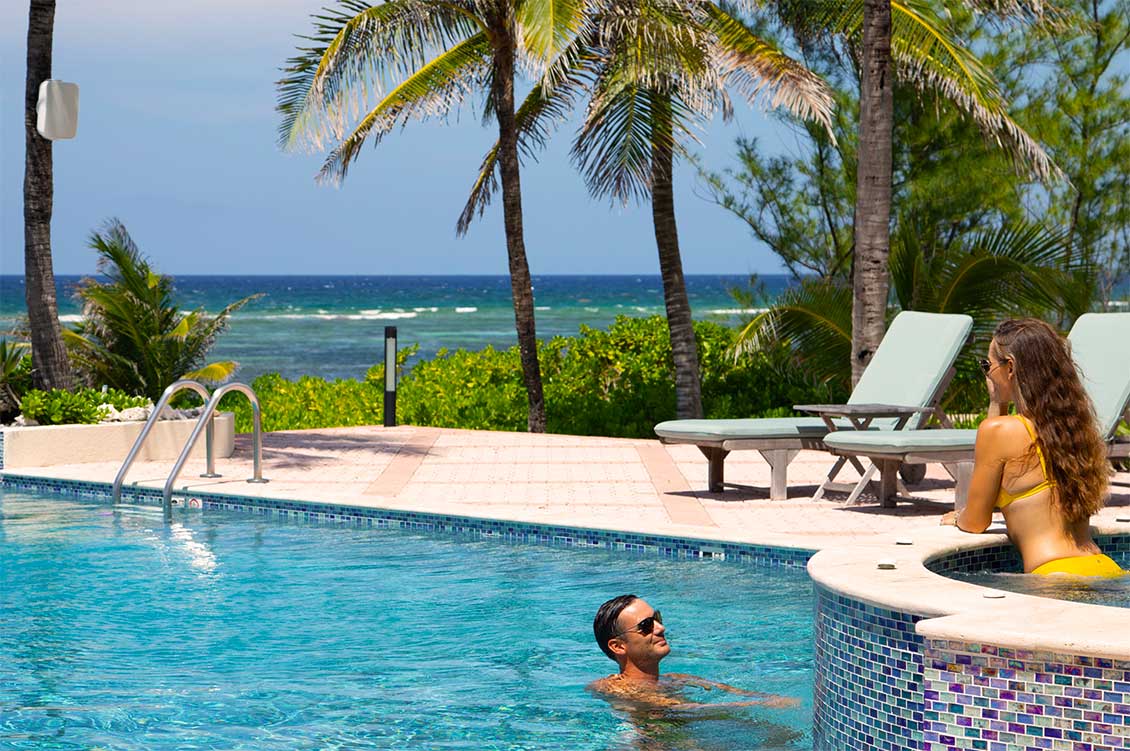 Inside, no expense was spared in upgrading fixtures and fittings, with new ceiling fans, light fixtures (mostly now LED), hinge and hardware on all internal doors, window treatments throughout, and a magnificent wood and marble staircase that adds a sense of dramatic luxury to the space. A new alarm system has been installed, along with new air conditioning units, and a new electronic sound system that has speakers installed throughout the property, even in the pool area.

Two of the bathrooms have been completely remodelled to bring them up to a contemporary level of design, and the kitchen has also seen an amazing upgrade, with a brand-new state-of-the art refrigerator and a six-burner Samsung range. A pressure tank and pump were installed to ensure excellent water pressure throughout the property. In addition, most of the furniture is new.

The entrance way has changed immeasurably, the owners say.

“The double set of front doors had rotted out, so we remodelled the entire front of the home and brought in a beautiful wooden, custom-made thousand-pound front door,” they said.

This, along with the extensive renovations to the front of the property, whereby a stunning new fountain structure has been installed, is the owners’ favourite part of the entire project.

“We think the new doors and the fountain in front of the entrance has really created a big impression when it comes to the curb appeal of the property,” they stated.

Name says it all

Many of the grand homes in the location of Rum Point are individually named. The property used to be called Villa Zara, named after the original owner’s daughter. The new owners felt it was important to personalise the home for themselves, so they chose Blue Water Therapy after considering why they loved the Cayman Islands so much. They visit the Cayman Islands several times a year and chose this location as the place for their second home for a number of reasons, safety and security being one and proximity to the United States another. However, the lure of the ocean has always been an important reason for a visit, they said.

“Our vacations are almost always based around the water,” the advised. “We love boating, scuba diving and fishing. Whenever we would think about a vacation in Cayman, we would say we need our ‘blue water therapy’. It was the obvious choice for the name of our Cayman home!”

80 Degrees CaymanJanuary 18, 2022December 20, 2022
How can a luxury home enter a new strata? With the integration of the latest smart technology. When working in unison, the best home automation systems are woven into the house’s design and framework to make life more effortless, more secure, and even more [...]
Read more »

80 Degrees CaymanMarch 8, 2022December 20, 2022
Update Monday, May 9 Denise has passed the 652-mile on her journey. She is now on her way to the challenging Mount Whitney summit located on the Sierra Crest and the Great Basin Divide in California. Caymanian resident Denise Powers is about to take [...]
Read more »

80 Degrees CaymanJune 13, 2022July 28, 2022
THE GLOBALLY LAUDED CHEF SHARES THE COOKBOOKS THAT CONTINUE TO INSPIRE HIM To gourmands around the world, Éric Ripert needs no introduction. His renowned New York City institution Le Bernardin is one of the America’s  most decorated restaurants. Closer to home, we can sample Eric’s [...]
Read more »